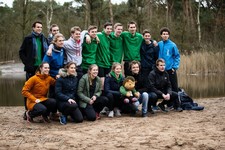 On Saturday, February 15, 19 motivated Kronauts left for Eindhoven for the NSK Cross, though the first fell before they had reached Eindhoven. But many a Kronaut had brought its competitiveness to a higher level, even if only for a short time because they found out that they had to be on the same platform at the 's Hertogenbosch station and could therefore immediately take the escalator down again. Arriving in Eindhoven, the kronauts were taken to the stratumse moorland with the shuttle bus, where the competition was close together, literally and figuratively. On the stratumse moorlanf a beautiful trail was plotted along the Kannunukesven and rietven of 2.3 km, 6.1 km and 8.7 km. The kronauts already started warming up to be able to set a fast time. First it was the men and women of the long cross, with some fantastic results.

It would be nice starting by saying that it was an amazing day and the sun was shining however, unfortunately, this would be a LIE. 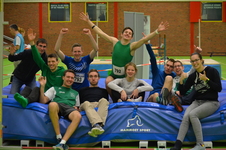 English text not yet available 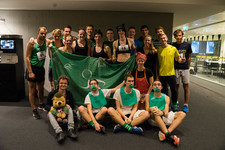 On Friday the 13th of December was the NSK Trappenloop at the Erasmustoren in Nijmegen.

On the 19th of October, eleven enthusiastic Kronauts left for the NSK Weg in Wageningen to run a 5k or 10k. After exploring the course thoroughly with each other, Nienke, Vincent B. and Martijn O. sprinted away for the 10k. A few minutes later, Pauline, Jitse, Twan, Thijs B., Loek en Iris started at the 5k. During the race across the campus and meadows of Wageningen, some were suffering, but luckily there were Michelle and Lieke to support them. Despite the strong wind, a few PRs were set. Martijn even became third at the 10k with 35:54! After the award ceremony, everyone rushed back home, because Enschede will always be more ‘gezellig’ than Wageningen. 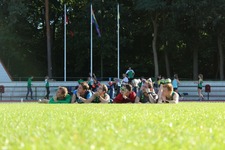 On Saturday the 14th of September it was that time of the year again, time for the Kronauts to compete with the other student athletic teams on the NSK teams in Nijmegen. It was time for our technical athletes and our runners to show their talents and gather as many points as possible for our men’s and women’s teams. Good results where delivered: at the men’s competition Kronos won the triple jump with a strong first jump of Roy and the high jump was won by Hidde. Furthermore, some good results were delivered by Marnick on discus (3rd place) and javelin by Jitse (also 3rd place). The men’s team achieved a fourth place overall. With the women’s team it went even better: from the first startingshot the relay team (Anna, Annabel, Liselotte and Michelle) won the first silver on the 4x100m. Also, on the Olympic relay the female team (Annabel, Lynn, Merel Wevers and Michelle) managed to get silver again. On the other events the women also did well. Gemma became second on the mile, Renee third on the 3000m, Marjolein second on the 100mH and third on high jump and triple jump, Merel Wevers became third on the 400 and javelin, Lynn became second on javelin and shotput. With all these results the female Kronauten got their well-deserved silver medal.

The Great Kronos Bake Off