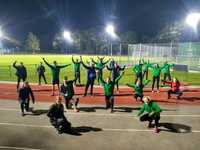 After a year with more internal than external competitions, last tuesday it was time for the all desicive Kronolympics. Many Kronauts have prepared well and used the trainingscompetitions and Koronalympics to build up to this wonderfull event.

In the competition we saw that this year besides fysical preperation also mental preparation was done. Thijs van Aalten showed to be inspired by his great example Johannes Vetter, whom did already throw way past the 90 metres with his javelin. After the mighty runup, the roar and the landing on the tartan of the Utrack Thijs decided that it was safer for everyone to net let his javelin fly that far and thus decided to land it just short of the 30 metre mark. A beautifull distance for Thijs who was pretty close to his own PB.

On the Drienerlose El, the kingsdistance on the Utrack, the times where close either for the men and the women. Gijs really stood out and showed his 8.14s on this distance, being almost half a second faster than the number 2! For the women it was more nerve racking but in the end Merel just took the win from Michelle. This battle was also typical for the general classification. Michelle really put the pressure on Merel, even catching up some points on the long jump with a leap of 4 metres and 87 centimetres. Unfortunately for Michelle the gap in points increased massively after the 200 metres over the Hurdles. Merel was one of the two athletes, together with Jitse, that managed to run below 30 seconds and with this time she took the lead strongly.

At the long jump the (old) secretaries really stood out. All three did not land far from their PB's. Koen even managed to equal his PB. After seeing the jumps of the secretaries the current treasurer decided that it was his task to keep the honor of the treasurers high and thus showed great form by equaling his best jump of the Koronalympics. Special mention for Tim who jumped the unfortunate distance of 4.99 metres and stayed just below the magical distance of 5 metres. However this is a really good distance and it gave him the third place in the long jump.

After four events it was time for the ending 800 metres and the battle for the women was surely not done yet. Myrthe was going strong on her road to the podium but unfortunately had to cease the fight which meant only Lieke and Anouk could do a throw for the bronze. Lieke took the opportunity with both hands and showed that all her preperation on the bike was not in vain. She ended the competition with a beautifull 2.52 and also managed to become second on the 800m.

Also for the men the differences before the 800 metres where small. Willem, Fabian, Koen, Levien en Thijs van Aalten all stood within 65 points of each other, which compares to 5 seconds on the finishline. Thijs van Aalten managed to grab the lead from these 5 and even managed to pass Marnick in the General Classification. However the battle everyone was watching was between Fabian and Koen, with a difference of 40 points to the advantage of Koen before the 800 but Fabian being the better runner, on paper. Koen managed to hold on to Fabian and this way he defended his place in the GC. We also see that the score for battles between Koen and Fabian is now 3-0. So the upcoming internal competitions we will see how Fabian will react. After seeing the batttle Thijs van Aalten and Nart also wanted this kind of battle. They started discussing about who would take the lead already before the start and only stopped after 600metres in the race. Eventualy it came down to a sprint that, according to the rumours, was faster than the Drienerlose El of both athletes. Unfortunately Nart had less energy in the legs and had to let Thijs win. A special mention for Thijs Baalbergen who showed his great form on the 800 by running 2.16 on the 800m, good for the second place and only 5 seconds slower than his PB.

Eventually the GC is won by Merel W and Jitse. Both athletes managed to win 4 of the 5 events and thus received the Kronos Perpetual trophy for their efforts.