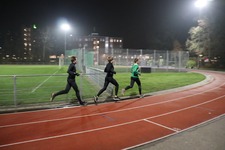 Last weeks was the first moment to score points in the renewed Internal Competition (IC). Due to the measures concerning corona, it is not possible to participate in competitions during the winter and therefore the IC was focused in the winter on testing and measuring the general strength and fitness of Kronauts.

First, the Combine was on the agenda to measure the general strength of Kronauts. The concept of the combine was taken from the NFL Combine that takes place every year in the American Football league to determine an athlete's overall fitness. The Kronos Combine had five parts on the program. First of all, the 40 meter sprint, not from the starting block, but from stand! Experienced sprinters like Jeroen and Gabriel were eager to show what they could do in the short distance. An exciting sprint, because in the two heats they did they both ran the same time of 5.38. But the races between Thijs and Marnick and the ladies Michelle and Merel W were also very close. The Men both ran 5.72 and the Women 6.20. There were also good performances for Merel L (6.43), Jitse (5.84) and Twan (6.24). Which made it immediately exciting in the all-around after the first part. Then it was time to show how explosive and strong the participants were. This was done through two parts: The Two-Legged Stand Long Jump and Throwing a Bullet Backward. With the long jump it was very close between the men and women. The men were within 35 cm of each other and the women within 45 cm. Jitse's longest jump of 2.70 m set the benchmark, but none of the men could match. With the women Michelle showed why she can call herself a long jumper and jumped to a nice distance of 2.40 m. Throwing the bullet backwards turned out to be more difficult than expected, luckily all the bullets made it to the sandbox and there were no dents in the tartan. Here too Michelle showed that she was the most explosive and threw a nice distance of 14.10 m. In the men it was exciting between Thijs and Jitse where Thijs could just beat Jitse by 10 cm by throwing 13.80 meters. To look at the maximum strength, the fourth part was the maximum bench press. In the women Merel W managed to press an impressive 50 kg bench, which ensured that she won in the ladies. With the men this time it was Jitse who just beat Thijs by pressing a nice weight of 75 kg bench. In addition, the other men were very well matched, all three of them managed to reach no less than 60 kg. Last but not least, the most exciting and feared part was the Planks. The idea; try to plank as long as possible and last man / woman standing wins. Everyone started with good cheer (cough) and at the beginning there was still laughter, but after a minute it was already very quiet. After 92 seconds, Thijs realized that he had still left the oven on, so he quickly jumped up. With the women it was close again and only after 3 minutes all three were done with it. Among the men, Gabriel, Jitse and Marnick were evenly matched and managed to keep up the boards for 4.5 minutes. Lord and master was Jeroen who stood as straight as a plank for no less than 5 minutes. After five parts it was clear that Merel W had won in the women, followed by Michelle and Merel L. In the men it was Jeroen who narrowly took the win just ahead of Jitse, Gabriel, Thijs, Marnick and Twan.

The second IC race was the Cooper Test. A nostalgic affair for many, because everyone has probably done it in high school. The concept is simple, run as fast as you can for twelve minutes and then measure the distance at the end. In three shifts split into two groups, twenty Kronauts went out to see if they could get their old records out of the books. In the first shift the men walked in each other's neck for 12 minutes, in the end they finished within 35 meters of each other with Bas and Ivo both at 2210 meters and Thijs at 2245. The women ran at a slightly faster pace and Isis managed to a nice distance of 2750 meters. It was exciting between Michelle and Suze as they also finished within 30 meters of each other with 2430 and 2460 meters respectively. Ambitions were high in the second shift. Ron and Casper kept the 30 meter margin high and finished with distances of 3120 and 3150 meters. Merel W, Annabel and Rogier also ran a nice train and they managed to record a nice distance all three. For Rogier it were 2850 meters and for Merel W and Annabel 2920 and 2750 meters respectively. Jasper had a taste for it and with a monster pace he made sure that he won by scoring a distance of exactly 3300 meters. In the third heat it was time for the real fanatics to see who would run away with the farthest distance. Jitse as a real race multi-camper stood a no man's land between four experienced runners, but managed to keep up by running a nice distance of 3320 meters. Vincent and Nart ran fast and both recorded nice distances in the 3400 meters, namely 3410 and 3480. The victory went between Chiel and Twan, both broke the magical barrier of 3500 meters, but Chiel had to acknowledge his superior in Twan and finished 30 meters behind Twan who walked a bear from a distance with no less than 3550 meters.

After two games we can draw up a provisional score in the internal competition. Among the men, Jitse leads the list with 1452 points, followed by Twan with 1314 and Thijs with 1062 points. Among the women, Merel W is at the top with 1443 points, followed by Michelle with 1258 points and Merel L with 691 points.

For a more detailed standings and the results of all matches see the following link: Standings and Results