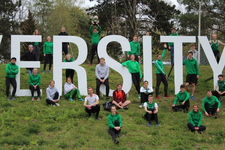 Last Sunday, the moment was finally there! The first virtual competition was a go and gave 28 Kronauts the chance to get back in the spirits of competition. For many of them, this was their first time experiencing a competition day.

The day started early with the preparation of the events, within the hour everything was ready to go thanks to the many hands available. Under the instruction of Michelle, the joint warming up was started. As if small ducks waddling in a polonaise everyone did what was asked of them. With a nice warming up done the first athletes could attack the hurdles. Marjolein and Merel W made sure the first heat brought an exciting race with a really nice 15,9s and 15,8 respectively. An hour later shot put was started, Thijs R gave a masterclass for the rotational technique and put the shot 11,51m away from him for a new pr. A bit later Marjolein got informed by Jitse that he got a call from André Kuipers that the shot could definitely be a bit lower. Eventually Anouk, Ivo and Maartje also put pr's. As 13 Kronauts were pushing against shots, Renee was started away for her 3000m with Jasper as pacer on the bike beside her. After a tough bata weekend running a few stints, she still ran a 10:24 on brand new spikes. After Renee was cheered on and the group photo was taken around the letters, the high jump could start. The level, just like the bar, was very high. Up to 1,55, the jury could almost note no faults. On the other hand, 1,60m was a true battlefield, over half of the participants had to leave the competition. Out of this battlefield, there were two people with a small victory both Fabian and Michelle could note down a new pr of 1,55. Koen, Gabe-Jan and Tim all jumped a very strong competition, but couldn’t tip Gijs who flew over 1,75. After which he tried 1,76 for a new pr but sadly wasn’t able to clear it. Not that much later you could hear the start for the 200 meters, which in reality up to the last two heats was 190m long. After a sharp observation from Gabriel, the starting blocks were moved to the right lines. Out of the last two heats, there was still one pr for Daan of 26,6. Around midday, the goodie bags filled by Roy and Michelle were handed out. As the sprinters for the 100m were warming up, the hop skip & jump was started with a record amount of participants: three. When warming up Isabelle twisted her ankle a bit. But still, she jumped a pr of 8,34 in her second try. For the two men, their second try was their best as well, but not enough for a pr. As soon as hop skip & jump was done, the first clap could be heard for the 100 meters. Tim and Lars had the honour of being the first ones started away by Vincent. Both ran a new pr of around 12,1 and 12,3. Which one is right is still the question, apparently clocking short distances by hand is fairly difficult. But again, with a blistering time of 12,0, Gijs couldn’t be beaten. In the ladies' heats, both Myrthe and Annabel came over the line in a time of 13,7. In the last heat our chairwoman Dunya, with a time of 15,6, came over the line 2 whole seconds behind our treasurer Ivo who ran a 13,6. As the first heat of the 100m was started away, the first discus flew through the air. Again Thijs R showed us all how to play frisbee with a very respectable distance of 37,68. Jitse went undercover as Fabian and had Dunya, who was tasked with measuring, completely fooled until she realised that Fabian had never thrown that far. Next to the banter, there were pr’s for Anouk, Fabian (yes a Fabian himself as well), Jitse (not as Fabian), Thijs A and Ivo. With discus still in full swing, the 400m participants started their warming up and realised that they had already done a lot that day. After 3 heats it was clear again: a 400m is still a very hard event. Every runner went all the way in, which can be clearly spotted in the small 2000 pictures which were taken that day. Merel was the fastest lady with a time of 1:00,6 at the moment of crossing the finish. For the men, Lars crossed the line first with a pr of 56,2. After a few Kronauts were drowning in the lactic acid build-up it was time for javelin. Jitse was prepared to completely throw his elbow to smithereens, with success apparently and threw a 45,42. Marjolein threw the farthest with a distance of 31,32. During the warming up Lars threw a spear which on impact broke in two. Ivo challenged him to fix it with duct tape and sticks which could be found around the track and throw with it. Ivo even upped the stakes, if Lars threw it further than 23 meters, which is what Ivo threw, he would get a six-pack Klok. After three improving tries, he could only manage to get within 3 meters. With only the long jump and the Swedish relay to go, the Kronauts left in a big group towards the sandpit. Amongst the encouragement and cheers from their co-Kronauts Anouk, Tim, Gijs, Gabe-Jan and Bas were able to jump new pr’s. Eventually, Roy showed he has the technique, but not the consistency in the run-up with only one valid jump. Michelle showed the complete opposite with every jump being valid and ending up with the furthest distance of 5,05m. After a bit of puzzling to make the teams the Swedish relay could finally start. In the first heat team MMMA, Ivo’s Harem and Team Zooitje had to take it up against each other. Team Zooitje crossed the finish line first and Ivo’s Harem wasn’t able to finish in front of MMMA. In the second heat, it was Kronos Mannen Team 1 and 2 against Sprintgroup 4. They all crossed the line within 10 seconds of each other. Team 1 ran towards the win with a gap of six seconds to Team 2 which in their right took another 4 seconds on Sprintgroup 4. Sprintgroup 4 really should train a bit harder if they want to compete next time.

After a long day of running around, competing and bantering the volunteers and athletes of course deserved a bit too cold can of klok! We want to thank all the volunteers who made this day possible, everyone who took some pictures and contributed to the small 2000 pictures and of course the athletes helping with the great atmosphere at the track!