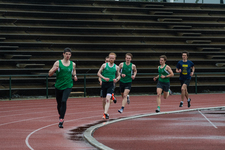 On the rainy morning of the 23rd of may the first kronauts were present in the FBK stadium in rainy Hengelo at 11 o’clock. The JKG committee had gained permission to make use of the stadium. The first events were set up quickly with the help of a few extra Kronauts. The JKG committee also arranged it so that the speaker installation in the stadium could be accessed. They also arranged a microphone, which made it possible to hear the high quality commentary of highly trained commentators such as Jitse, Thijs A, Willem and Lars.

As a nice entry, the first event was the 400m hurdles, the first event was occupied by two gentlemen, Willem and Fabian. Willem had already predicted that he would most definitely trip over one of the hurdles. Sadly this didn’t happen, so maybe it’s time to give up your hobby as a fortune teller. After the height was adjusted it was Merel W her turn over the hurdles with Annabel in the same heat, but running next to the hurdles. After an exciting race they crossed the line only a second apart.

While the hurdles were being put back on the carts Jitse and Lars kicked off pole vault with their support act before the real competition started. Not that much later they were shown by Nart, Fabian, Gijs and Twan on how it’s really done with a real bar instead of a cord. Twan won this one by flying over 2,80m.

While these men were flying through the air, Renee ran her 3000m on her own again. She was planning on Casper pacing her, but he cancelled earlier in the morning. After Merel W’s plan to turn it into a long relay by all pacing a bit of her 3000m fell in the water because only she and Lars were in for it, Karin offered to ride on the bike next to her. That was maybe also a bit of a better idea and with a quite alright time of 10:25,4 in not quite alright weather, she can be fairly happy.

Finally it was time for the best occupied running event of the day, the 100m. The ladies were allowed to go first, as we learned during the gala pubquiz. Annabel was the fastest of the ladies with a time of 14,1 with Maartje only lacking 0,1 second behind. Roy won his heat with a gap of a full second to the number two.

Immediately to the best occupied throwing event of the day, the shot put. A small miracle took place which turned out to be no miracle. Isabelle put her shot over 9 meters. After a strong example of self-knowledge she decided to check the weight of her shot with Thijs R. It turned out to be the new diet the shot was on, it had lost a full kilogram. The men had no such problems and Thijs R and Roy put a gap of a full two meters between themselves and the competition.

While the shots were still flying towards the outer atmosphere, the starting shot for the 800m could be heard. Jitse immediately took off on the right pace as discussed with Lars. He brought them through the bell at the agreed pace of a 1:04 first lap. Lars was leading the pack through the 400 with Thijs A on his heels. The bettle was very close up to the finish. Lars was just able to keep Thijs A and Nart charging from the back behind him and crossed the finish line in a time of 2:11,5. After a closer analysis of the finish photo it was decided that Thijs A had defended his place from Nart. With the first 400m of the 800m in his legs as warming up Jitse started with the 1500m. Because he paced Lars on the 800m, Lars paced him on the 1500m with the help of a bike. Twan also biked with them for mental support.. After a perfect opening the pace was feeling quite fast, but this was expected as could be read on his hand: ‘Splits: 55, 2:08, 3:21, dead’ Death only came a little bit earlier than expected. He crossed the finish line in a time of 4:53,0 in the harsh weather.

While Jitse was doing his rounds and the right boards were placed in the right positions, kronauts could fly through the air again, this time without a pole and as far as possible, not as high. Roy jumped more distance than three times his own body height with a distance of 6,15m. Michelle jumped the furthest of all the ladies present with only missing the 5 meter mark with one centimeter to spare.

With the long jump done, 5 kronauts could be found at the start of the 200m. Serie one consisting of Maartje and Dunya was quite exciting. Maartje narrowly took the win with her with a time of 30,4, only half a second ahead of Dunya. In the second series Gabriel, Daan and Ron were in the starting blocks. Ron walked away with the win with a time of 26,4 and a gap of exactly one second to the other two runners. After examination of the finish photo, second place was given to Daan.

One hour and 50 minutes after the 800m, all 800m runners and Fabian could be found at the start of the 3000m steeplechase. Most were not really looking forward to it, but that is exactly what motivated them to do it. In the first round it looked as if Twan run away with the win but nothing was less true. After the first water passage he was 20 meters behind Nart due to an underestimation of the skills required to pass over the water.Nart won this one on technicality with a nice time of 11:27,7.

The high jump, also known as jumping into a wet sponge, was quite a challenge in the rain, which was also reflected in the results. Nobody could match their own PRs. But under the circumstances they were all not far from it. Michelle was 5cm below it, Gijs and Tim were both 10cm below their PR respectively. All in all, not the greatest disaster ever.

The second 400m of the day was run, but now without hurdles. Willem and Roy turned it into an exciting match. In the first 200m it seemed as if Willem could not match Roy's speed and had to drop a small hole. But on the last part Willem was better able to maintain his speed and he almost closed it again. In the nick of time Roy took the win with a time of 59.7 with Willem behind by just under 0.4 seconds.

The second 400m of the day was run, but now without hurdles. Willem and Roy turned it into an exciting match. In the first 200m it seemed as if Willem could not match Roy's speed and had to drop a small hole. But on the last part Willem was better able to maintain his speed and he almost closed it again. In the nick of time Roy took the win with a time of 59.7 with Willem behind by just under 0.4 seconds.

While the two gentlemen ran around, spears also flew through the air. Atletiek.nu only lists the best throws because they used signs. The bad weather was not a negative factor for all athletes. For example, Julia added a nice 5 centimeters to her PR.

Then it was finally time for the final relay. Here we had a men and women team on it. Kronos women consisted of: Maartje, Dunya, Julia and Michelle. Kronos Mannen consisted of: Tim, Daan, Willem and Gabriel. Then there was a mixed team called Isabelle and the beasts, which consisted of: Isabelle, Thijs, Nart and Lars. Of course, each team had practiced very well on their changes and nothing went on spec. The victory went to the team Isabelle and the beasts thanks to a few lesser changes in the team Kronos Men. But the biggest contributor was final runner Thijs who found a 6th gear halfway through his 100m. He crossed the line just under half a second earlier than Gabriel. This of course had to be celebrated extensively.

All in all, a very successful day. Of course a very big "thank you" to Merel W's parents who wanted to help again. Thanks to all other volunteers too. In addition, of course, all athletes who have made it a great fun day again and made for an almost real competition feeling. Last but not least: also the JKG committee that made the whole day possible!