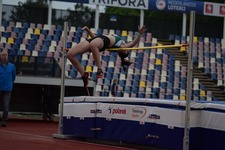 Last Thursday, the 1st of July, the LAAC/MPM competition took place in Hengelo. The first "real" competition again for many athletes, and it felt a bit strange that all events were already set up when we got to the track. On top of that, there were finally people from other associations again. 21 Kronauts ran, jumped and threw towards nice results.

It was now time for the real powerhouses of Kronos to show what they got in the throwing events. Marnick and Thijs R competed in the discus throw and threw 36,91m and 34,25m. In the women's category, Merel L and Isabelle finished with a distance of 25,37m and 24,46m. Nice distances were also thrown in the shot put, with a personal best distance of 11,74m for Thijs R and decent distances of 11,28m and 11,27m for Roy and Marjolein.

In the high jump, three men competed, Jitse, Gijs and Koen, all of them jumped a nice 1.70m. Two women competed in this event, Marjolein jumped 1.55m and Michelle 1.50m. Gijs also competed in the triple jump, which resulted in a second personal best for him this evening with a distance of 11,21m. Twan managed to pole vault himself over a height of 2.70m and Roy took the win in the long jump with 6.54m. In the long jump, Michelle, Annabel and Isabelle also competed. They jumped 5.09m, 4.88m and 4.21m, which meant a third personal best this evening for Annabel!

The last event of the evening was the 2000 meters steeple chase. 3 Kronauts competed in this event, cheered on by the other Kronauts, who managed to claim a first row seat near the water jump, to be able to witness the action. Nart finished first of the three Kronos men in a time of 6:55,51, followed by Twan, who ran 7:24,61. Koen completed the field of Kronos men with a time of 8:21,14.

After the wet clothes were switched for dry, warm ones and the bags were packed again, it was time to return home. A few days of rest are ahead, before travelling to the competiton in Emmen on Sunday and show them what we got!