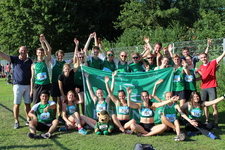 Sunday morning 5 September at 6:45 am the alarm went off, a tad early for the last day of the holiday if you ask me. But it was for a good reason: we traveled to Gouda today to compete with 12 men and 10 women for promotion to the second division!

A pleasant sun welcomed us on the track of AV Gouda. Everyone had traveled early to the west of the Netherlands to see the first events together. The day started with the 800 meters and the hammer throw for women, where Annabel and Merel set good times (2:41.59 and 2:52.41 respectively). Isabelle threw the shot to a new PB of 19.98m! Michelle and Gijs both started the day with a jumping event, where they both set a new PB. Michelle jumped 5.30m with long jump and Gijs successfully jumped 1.80m with high jump.

Twan decided to cool off in the steeple water tank in this warm weather and stopped the clock at 10:43.82, with which Twan also recorded a PB. In the shot put Roy threw the shot to a PB of 12.14m.

Then it was the turn of the sprinters to show their best side. Annabel, who had only just finished the grueling 800 meters, recorded a strong time of 13.67s. Myrthe also ran this distance, she did it in 14.46s. Among the men it were Gijs and Willem who took part in this event, they recorded 11.67s and 13.26s. In the meantime it was Merel L's turn to throw the shot as far as possible in the hammer throw, she landed it after 19.40m, which meant a small PB.

Around lunchtime it was Marjolein's turn to start her day. For her, the pole vault was on the program, which also coincided with the 400mH. Perhaps not the ideal combination in a short time, but with a height of 2.70 m on the pole vault and a time of 1:07.85 on the hurdles you can say that Marjolein has performed this very well.

Merel W took on the 400 meters today, without any hurdles in the track. She took the win here in a time of 59.95s. At the high jump mat it was Koen's turn to jump as high as possible, he recorded a nice height of 1.65m. A little further on it was Marnick who was doing the shot put, he let the shot land after 9.03m. The second part was also waiting for Myrthe and Roy. For Myrthe this was the javelin throw, she scored a nice distance of 29.94m. The long jump box was waiting for Roy, where he achieved a distance of 6.57m.

It was then the turn of Casper and Lars to complete 1 lap on the track as fast as possible. Willem also did this, but he encountered some hurdles on the way. Casper stopped the clock after 1 lap at 54.96s, Lars stopped after 56.02s. Willem flew over the hurdles to a good time of 1:08.06.

Four women were then simultaneously working on the following events. Anouck threw the javelin to a new PB of 34.63m, Merel ran the 200m in a time of 27.07s, Michelle jumped a new PB in the high jump with a height of 1.60m and Isabelle put the shot put to a distance of 7 73m.

The next event on the track was the 200 meters for the men, where Gijs and Lars competed in the same heat. Gijs raced to a nice PB with 23.61s and Lars finished in 27.20s.

In the hot afternoon sun, two more running events were scheduled. In the women's 3000m, Isis ran strongly to a good time of 11:50.90. Chiel and Vincent ventured into the 1500m, with Chiel narrowly taking the Kronos victory with a strong last 100m. Vincent finished just seconds behind him in a big PB of 4:26.74.

In the second group of the men's long jump and women's shot put, Daan and Marjolein set good performances with 4.93m for Daan in the long jump and 11.90m for Marjolein in the shot put.

After a very successful day with many PBs, only the all-decisive 4x100 meter relay was still on the program. With 4 successful substitutions, the girls stopped the clock at 51.35s, which meant a nice second place in this event. The men finished in a solid time of 47.17s.

All points added together resulted in a fourth place for the women, which means they can compete in the second division next year if they want to! Unfortunately, the men did not manage to achieve this with seventh place.

All in all it was a very successful day with performances as beautiful as the weather! After the game there was of course a nice dinner at the local McDonald's and it was time to travel back to Enschede for a good last night's sleep before the academic year starts again.