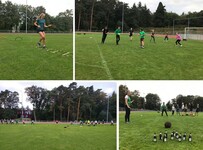 Soon the empty grass field at the UTrack was transformed into a field full of all-around elements. On Wednesday 15 September it was time for the first introduction activity of the year, the Kronolathics! Five strong teams were ready to battle it out. All teams were divided over the 5 different parts. The goal was to collect as many points as possible with your team.

With a loud ringing bell, the Kronolathics started off. At the sound of the bell, the first groups started pulling for their lives in the only real tug-of-war duel. Here they immediately took an excessive win of 3-0. The bell also signalled the start of the relay race across the field. This was not just a relay, but a sponge relay. At the beginning of the relay course was a full bucket of water, while on the other side was an empty bucket. The team that managed to fill the bucket on the other side as far as possible won the relay. But it wasn't made easy for the teams. Between the two buckets were steps, bicycle tyres and hurdles. When the time was up, the two buckets were compared and the bucket with the most water in it, got all the points. Let's move on to the next part, the well-known ultimate frisbee. Of course the beautiful Kronos frisbee was brought in for this. After this heavy game it was time to throw some javelin. Spear throwing was an event in which you did not compete against another team. The goal was to score as many points as possible by throwing the javelin into hoops. A hoop close to the field earned less points than a hoop far away in the field. The bullseye was the upright spear at a distance of 20 metres. When it was hit with the spear, the team got a full 80 points. Three people had enough strength and sense of direction to throw the javelin against the bullseye. Strength and sense of direction were also needed for the last event, medicine bowling. Medicine balls weighing 7 to 8 kg were bowled to the Klokbeer cones. The number of cones that were knocked over indicated the number of points. The winning team in this event was very fanatical. They managed to break two whole Klok bottles.

To get the disappointed looks of the Kronos members back on happy it was time for the winner to be announced. Without counting any points, because the candidate board had not exactly kept track of all the points, it was nevertheless very clear who had won. The winning team was in first place in almost all parts. This was the team of Paulina, Lars, Fabian and Gabriel, also known as team 5

The evening ended with well-deserved drinks in the sports canteen. During the after-dinner drinks, the prizes were handed over to the winning team. Apart from the eternal glory, this prize consisted of four beautiful Kronos drinking bottles! And now on to the next introductory activity, the meat & greet barbecue! I hope to see y’all there <3