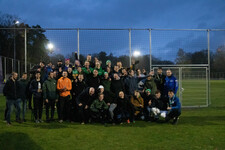 Not even half a year has passed since the last Campusloop and already another one is being organised. On Wednesday 6 April, we organised the Kronos Campusloop on the usual date a few weeks before the Bata. This time for the first time in three years without Corona restrictions. Let's keep it that way!

On the early Wednesday morning the committee was already present at nine o'clock in the morning at the UTrack. For some members including myself this was a bit too early, but after a couple of cups of coffee at the copy machine we were ready to go. To everyone's delight, we were also given walkie-talkies, which turned out to be very useful for direct, clear communication, or to blare through each other's conversation. Ethical discipline was sometimes hard to find. We had until 13:30 to make all preparations before our first volunteers would arrive to help build the course, and against all weather forecasts we had a lovely sunny morning. Unfortunately, this would change to wetter conditions later in the day.

After the course had been largely prepared under the supervision of Daan and Pepijn with lines and traffic fences, and the start/finish area had been set up under the watchful eye of Anouk, and Dennis had prepared the secretariat, all closely supervised by committee chairman Gerber, it was time for a tasty Chinese buffet in the sports canteen. There a filling buffet awaited us with a varied choice of all kinds of food, both meat and vega was prepared.

While all committee members, volunteers and officials were eating their bellies full, Gerber had already run outside to continue with the preparations, because the van of Ipico had to be driven onto the terrain. Fortunately she had just enough time to eat something, because after this we would not have time to eat until at least 21:00.

The secretariat was filled and in no time the first start numbers were collected. Meanwhile, Daan and Pepijn were busy putting the final touches on the course and Pepijn also gave instructions to the traffic controllers. Now it started to itch a bit, because we wanted to start at 19:00 and suddenly the time seemed to go twice as fast. Finally at 19:06 Gerber gave the yes sign to race director Bram to start the race.

Now it was finally time: after four months of preparations, the Campusloop 2022 was finally underway. A real pleasure for the committee to finally arrive at this point. Under loud and enthusiastic commentary from our microphone operators Ivo and Lars, the runners for the 5 and 10km started. For the 5km 99 participants started and for the 10km 47 participants. With a fast time of 17 minutes and 23 seconds Anders van Riesen crossed the finish line first. Less than 5 minutes later, Marit de Vos came in as the first woman with a top time of exactly 22minutes. The runners of the 10km did not wait either, as Caleb Trabitzsch was the first man to cross the finish line with an excellent time of 34 minutes and 41 seconds. Less than 4 minutes later, our own Isis Besselink crossed the finish line smiling and laughing with a great time of 38 minutes and 19 seconds.

Besides these two challenging distances, we also organised the shorter 3km for runners who find the 5 or 10km far too much. Of course our own Casper Kroon crossed the finish line as the first man with a fast time of 10 minutes and 9 seconds. Less than 35 seconds later, Elisabetta Ribera d'Alcal of AC TION was the first woman to cross the finish line with a very fast time of 10 minutes and 44 seconds.

When all the participants had finished a little after eight, it was time for the prize-giving ceremony. At the same time, the team classification was made up by the jury. The team that finished closest to each other won its own prize: a voucher for the whole team to jump for free for one hour at Jump XL Hengelo. Congratulations team "We are swimming" with your win! Also kudos to our sponsor Kieviet sport who arranged extra podium prizes for this edition of the Campusloop.

We look back on a very successful (wet) 10th (or was it in fact the 11th?) edition of the Kronos Campusloop and hope to see you all again in April 2023 for the next edition!