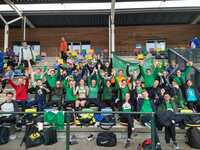 Still reminiscing about the Batavierenrace and party, at 10 a.m. the first athletes were already on the athletics track in Hengelo for the first competition match of the year. This year Kronos was present with 2 men's and 2 women's teams and a total of 35 enthusiastic Kronauts.

At 11:15, Roy and Fabian were allowed to kick off with the high hurdles on the 110 meter hurdles, and Fabian was so excited that he even ran in his running shoes. Both have earned great points for their team. At 11:30 Renske and Isabelle kicked off the discus throw for the women's teams, and despite all the injuries a nice high 25 meters for Renske. Michelle and Marjolein ran a neck and neck race on the hurdles that was won by Michelle who ran 1.2 seconds off her PB!

The next run was the 800 meters for Dunya, Gerber, Nart and Vincent, all four of whom had already covered a lot of kilometers during the Batavierenrace, but still managed to collect the points! The shorter sprint work was performed by Daan, Gabriel, Tim, Samantha, Annabel, Maartje and Michelle who all ran well and where Samantha unfortunately dropped out in the last meters.

In the meantime it was time for some throwing events with discus for Thijs and Rick and shotput for Marjolein, with a good season opener of 34 meters for Thijs, with still a lot of room for more!

While Roy jumped to a new PR with the triple jump, Fabian struggled to find the bar, Myrthe jumped a new student PR at the high jump, and Michelle equaled her 1.60 level from last season. Kaloyan threw the 7.25 kilo shotput over the 12 meters and Merel threw a constant 26 meters in the discus throw.

In the meantime, the men, Jelmer, Twan and Vincent, also ran a neat 5000 meters on the track! In the next round of jumping events, Koen jumped a steady 1.65, and that after all his running training, and runner Stan also jumped a nice 1.60 after 1 training. In the long jump Maartje came to just under 4 meters and Marjolein to 5.10.

In the men's 200 meters, there were some last minute shifts due to an ankle injury of Roy and Tim spontaneously ran a fast 200 meters. Gabriel and Daan also ran a 200 and felt the Bata stage in the last part. In the women's race, Merel took the win in the 200 meters and Maartje also ran well after being ill for a few weeks.

Somewhere on this day Marnick also managed to throw a nice 35 meters with the discus throw and Ivo threw for the first time over the 20 meters! The last event before the relays was the women's 3000 with Gerber, Dunya and Anne where all three were still running very well after all the running this weekend!

All three relay teams also crossed the finish line neatly without making any mistakes and so the last points were also secured. At the end of the day, the Kronos 1 women's team is neatly in second place nationally and the Kronos 1 men's team still has to do their best with an 11th place for the promotion / relegation match.

On to the next competition match on May 22 in Genderingen!