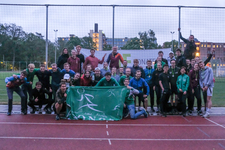 "Wow have you checked the weather forecast yet? What is the chance that the flat will continue?" These words are received by the chairman of the prestigious FLAAT committee on his telephone on Friday 20 May around 2 o'clock in the afternoon. Code Yellow and orange plague the south and east flank of the Netherlands, thunderstorms and thunderclouds float like ducks on the water towards Enschede. An emergency meeting takes place, the consensus is clear, nothing is more important than continuing the most prestigious athletics tournament in the world. After several prayers and rain dances, the weather gods showed their favorable side and split the sky open and the thunderclouds made room for sunshine.

Slowly the first participants trickle in and speakers Stan and Lars warm up for a speaker session so loud that the elderly residents of the Box will continue to whine about it for years to come. After one of the most scant warm-up sessions ever considered on the beautiful Utrack, the first event was about to begin. The 4x100m relay backwards. After a number of confusing test starts, the participants were ready for the start. Focus, speed and sheer willpower were bundled in the hearts of our participants. A deafening silence fell over the field. Until out of nowhere a starter clap gave the starting shot. The first participants started with loud cheers and roars and we noticed that 100 meters backwards can still be covered in a relatively short time. With a time of 1:28:89, team V.A. Coq Junior was the first to cross the finish line. A wonderful time for a wonderful event.

After the relay several technical parts started. In the 60 meter hurdles on a relatively wet tartan, Chiel showed that Dunya is not the only submarine of the association. After getting the tip to jump earlier for a faster time, he ducked under a horde through the watery tartan. In addition to this great action, Willem led his team to be the only one to set a time of under 10 seconds on the 60mH. Willem also shone like a herodotic Olympian in the discus throw. After a fine throw over 27 meters and an invalid throw into the net, he decided to throw his last discus out of the cage so hard that, in addition to the discus, he also threw himself out of the cage onto the grass. Marnick lived up to his favorite role, gladly letting the volunteers run a little while at the discus throwing to measure his discus. In the high jump, the height of 1.80 was achieved by a majority of the Kronauts. Dunya once again proved to be a submarine, by jumping below 1.20 after a stable 1 meter. With the 100 meters, the participants showed how hard they could pump themselves across the finish line. Lars Willemsen pushed himself over the finish line with a time of 12.23. A time that many a Kronaut can envy.

When the 800 meters had come to an end, an incident took place. The cause and essence of the problem can be divided into two incidents where, due to hours of hard work, the sharpness and eye for detail was lost to various organizers. The secretariat worked hard to process the results and a list of participants was drawn up. This was first sorted by registration date, then named by name, then the total number of points and finally with the total finishing position. The speakers worked hard to maintain the atmosphere of the waiting participants. A twofold competition was organised, a combination competition of a 400-Milka-400 and a 400-Tequila-400. After these matches have come to a phenomenal end, the sharp eye of the speakers has also suffered a dent. Once the time had come for the prize giving ceremony, fate took hold. Where the secretariat has described the results to the right of the number of points, the speakers have considered and passed on the registration order to the left of the team names. This has led to the following dire circumstances:

Besides this incident, this was a fantastic moment, the 400 Tequila 400 was won by our chairman, closely followed by the chairman of the Flaat, so you always have boss above boss. Daan liked his shot of Tequila so much that he also wanted to let the grasses and plants enjoy this shot in the forest, by throwing everything out there at the end of his game. In the 2nd classification Lars kept his title on the 400-milka-400, Vincent also achieved a good result here.

After the results, we saw the biggest ad of self-hype from the AAA3 house. This was very fine, many bells and weizen were drunk on this. Initially, most participants decided to celebrate their results in the fortress bar. But as the situation there was pretty lame, they soon returned to watch Daniel's pitcheradt. After a tight time, just over 10 minutes. Daniel also decided to partially dump his stomach contents back into his pitcher. Willem was so busy celebrating that he forgot to take his tin clock out of his bag. This had unfortunately opened itself which led to Willem pulling a skewer in the middle of the sports center.