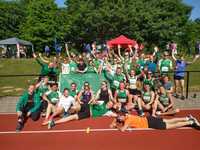 Have you ever heard of Gendringen? We neither. Until suddenly the 2nd league match of the 2022 season was organized by the as yet unknown club Atletico '73. With the Olympic delegation of the D.A.V. Kronos we go to the Achterhoek by car or the "burgercaterpillar" around sunrise. After a long journey, the first athletes appeared for their event.

The competition started with an 800 meters for the women. Isis started in the first series and ran her debut in the 800. Here she ran at high speed to the finish and became 2nd in her series, trailing first place only by 0.08 seconds. Later, Merel L started her series and after an impressive final sprint, managed to finish with a pike dive that Jasper Cillessen would be jealous of. After a short trip to the emergency room she still scored a nice 521 points.

Tion Tim, Koen 65 vo, Gabriel Quimis Rivera and Wouter appeared at the start for the 100 meters. Tim manages to set a very nice 11.83 and comes close to his PR. A great start to the competition for the Kronos gentlemen. Then the women appeared at the start of the 100 meters. Michelle was flexing hard and managed to rake in the points with a time of 13.10. Maartje and Samantha also flew to the finish line in very respectable times.

Lars, Jelmer and Casper appeared at the start of the 400 meters. This showed ultimate fluency and Casper was the fastest to get to the finish line, Jelmer followed with 0.14 seconds and Lars managed to improve himself compared to his previous 400 meters time in the competition. To everyone's surprise, it was not Merel Wevers at the start of the 400 meters among the women, but Marjolein. The opponents were so confused by this strategic move that Marjo destroyed them with a time of 58.91. Dunya also increasingly found her connection with the rest of the field in the 400 meters and shows that her transition from sprinter to runner has a bright future.

The next 400 meters was suddenly completely filled with obstacles. This turned out to be no problem for Nart, until he was suddenly attacked by the hurdle at hurdle 8. So remember kids, attack the horde before the horde attacks you. Despite the fall after his hurdle, he managed to get back up and close his 400 hurdles in a very neat 1.05. Stan has also fulfilled his function as an all-rounder by running a nice 1.07. In the women's race, Merel Wevers was at the start of the hurdles and, as expected, left her opponents far behind.

Tim also showed that he had the pace in the 200 meters and took many points. Gabriel managed to take a personal record and thus narrowly beat Daan for team 2. In the women's race, Merel Wevers zoomed into first place and Michelle set a personal record. Maartje also dived neatly under 30 seconds on the 200.

Nart, Thijs and Casper appeared at the start of the 1500 meters. By using a 17-year-old boy as a hare, all three managed to set a very decent time. Despite the fastest final sprint I've ever seen on a 1500 from Nart, Thijs managed to finish just a second faster. Casper also finished with a very good time and gave many points for Team 2 this day.

Anne, Gerber and Isis appeared at the start of the 3000 for the women. Gerber thought it was a relaxing idea to cycle from Enschede to Genkoppen and had a very nice warm up. This turned out to be a bit intense after about 800 meters and here Isis took over the lead of the green train from Gerber. Isis managed to finish first and took a lot of points.

In the Relays 4 teams appeared at the start. Many Kronauts have given everything for 100 meters, 0 wrong changes and 4 valid times. So it is certain that a lot of fast green trains were involved in the entire situation. In addition, we have seen an angry sprinter from Argo introduce a new event after a wrong substitution in his team. First he surprised us with throwing the baton right after his finish. After quietly taking off his spikes, he showed that spike throwing can also be a part of the experienced all-rounder. Perhaps a possibility for a fun part on an NSK?

But wait, you think, the reader who doesn't like to run at all. Where have all the jumps and throws of the day gone. Be minimally regretted, the highlights will be described in the next section. Starting with the men:

At the javelin throw, Marnick and Roy stood on the line to toss a javelin into the air. Marnick managed to break the 40 meters for the first time and set a personal best to get the points. For Team 2, Kronos debutant Hugo and Rick were ready to throw spears into the distance. With a distance of 41 meters Hugo managed to achieve a nice distance and many points for Kronos team 2.

Twan and Willem competed in pole vault. Very nice results from both who jumped close to their personal bests. There was a surprising result in the long jump. No, of course not, Roy won. Koen also achieved a good result for team 2 with a jump of 5 meters.

In the high jump, Jelmer was eager to pick up his old skills again, with a masterly jump of 1.70 he managed to get a few points for Kronos. Koen turned out to be a very nice addition to the jumping team of team 2 and again scored a nice number of points.

The women also excelled in the all-around, Isabelle achieved a good result in the triple jump. Michelle jumped to first place in the triple jump, a personal best and a result of which we are all very proud. Will the trip to Disneyland with Roy be the secret behind these results? We can only speculate about the activities that took place there. In the high jump, Marjolein was able to look down on her opponents with 1.65, who certainly did not come close to this height.

Renske and Merel have been shining during the javelin throw. Both also put down a nice result here. Anouck was unfortunately unable to participate actively in the pitching due to an injury. In the shot put Marjolein managed to set a nice distance to take the points. Isabelle and Renske also fought a battle for 8th place here. The one with 30 centimeters was won by Renske.

All in all it was a nice weekend for the D.A.V. Kronos. The women's team is by far number 1. The men's team has to make up for it in the next game by moving from 10th place to 8th place to be able to participate in a pro/de.

After this day in which many sports performances were delivered, ice creams were eaten and shoulders were burned, the green train headed for McDonalds in the car. As tradition dictates.

We are looking forward to the next game and hope for a double promotion to the 2nd division.