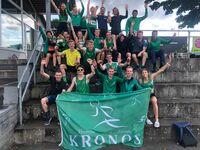 Dear readers of the wonderful Kronos website, here I am again. This time, however, with the somewhat less ambitious match report. This can also be seen as an evaluation of the article that appeared on this platform Sunday morning around 11:00, barely after the start of the competition. But don't worry, there will be many more aspects to discuss than just results .After all, that is what competiions are all about: a day of sporting fun with the best company. First, a short report on the atmosphere.

It was a quiet morning in ''if no farmers protest'' peaceful Harderwijk. The sun was smiling and there was a strange but pleasant smell in the air. The smell of 2 Kornos teams participating in the promotion/delegation match in September this year. But that smell was only a sign of things to come. Because during the day, there was more in the air than just the smell of promotion. Every now and then, the weather gods found it necessary to send a downpour over the Athlos track. These showers were interspersed with bright sunshine, which resulted in a firmly magical evaporating track. This cycle repeated itself about three times in total. These scenes created unique circumstances. In the sun people put on lots of sun cream, sat on Roskamps camping chairs and ate delicious hot dogs. But everything changed, when the water nation attacked. Even before the rain completely started, an immense evacuation of the coveted stuff to dry land took place, thanks to executive commander Maartje. Once inside, people looked with sorrow and a little sadism at all the people who did not see the sohower coming, and went home with wet pants. This atmosphere, however, changed a little, Thijs' camping chairs were exchanged for canteen tables and the bar shift could continue thier hot dog production at the same level, thanks to us. After all, shot put and hammer throw still had to be continued. Once it was dry, the Kronauts cheered along the track again, watched Formula 1 and sheltered from the next downpour. At the end of the day, we kept a close eye on the national men's score and shouted our lungs out for the 4x400 meters relay. For the women it was a little less exciting, but they too were able to enjoy a traditional shouting symphony during their relay. After the throats had been rested, free apple cakes had been brought in and the group photo was finally taken, it was time to go home again. What the plan was for dinner is still a mystery to this day. One thing is certain, our day in Harderwijk was 110% successful.

Then we come to the part of the article that I personally have been looking forward to the most during the match. Namely the correctly predicted results (based on the earlier article). And indeed, there were not many. A trend in the predictions was the ridiculously hyig number of predicted PBs. This proved to be correct, however, because in total our Kronauts managed to score 17 (!) PBs. A number of which we can still be very proud. More specifically, only Michelle's 1,65 metre jump at the high jump was correctly predicted. An honaurable mention is Tim van der Kooi's 52,67 in the 400 metres, which was missed by 5 hundredths of a second. Even better is the time of Thijs Baalbergen at the same distance. He managed to run faster than the predicted time. A staggering 54,77 was the result.

Much more important that a comparison with silly predictions, are the actual performances of the athletes on Sunday. The highlights will therefore be mentioned again. Anne proved to have much more to offer than just longer distances. On her debut at the 100m, she managed to run 14,62 despite a more than abysmal start. Merel Lasschuijt increased her PB on hammer throw by more than a meter. And Samantha proved to be invaluable on the relay. The distance to her direct opponent was completely closed. We got to know the starting skills of Daan on the 100 metres. Against the specialists, he quickly gained a metre on reaction time. These skills came in handy at the start of his relay. Basile managed to destroy his direct opponent on his 800 metres after a titanic head-to-head battle on technique and race instinct. Thijs van Aalten ran his fastest 800 metres in five years, which also deserves praise. Finally Nart's performance should not go unnoticed. Despite not being completely satisfied himself (which can be read back on his Strava page), he stayed around 10 seconds above his PB on the 5 km in not his best shape and still managed to overtake his opponent on the 4x4. For a complete overview of all the results of the Kronauts, I friendly refer you to atletiek.nu

A special S.O. to the athletes that I forgot to mention in the first article in the rush of my 800 start. The first goes to Dunya who was initially stuck to the article a bit awkwardly, but still managed to run her 1500 neatly ''on schedule'' to a PB. Samantha ran a very good 1:04 on her individual 400m and more importantly, kept her hamstring alive! Gabriel showed a steady line of progress on his sprint numbers again, by running faster on both the 100 meter and the 200 meter than in Gendringen. Marnick may not be forgotten either. In addition to some fantastic jury work, he got a PB of 26,28 on hammer throw. This is a nice bridge to the rest of the Kronos judgeds who helped: You are amazing!

To conclude the article, I would like to thank everyone who attended the match, both pysically and mentally, for their support. I would also like to thank our yellow friends from Utrecht for their 2 zero scores. This has helped the men to finish 8th nationally. The women did even better and finished in first place! This means we will be back with a double delagation at the start of the promotion/relegation competition in September this year. The second competition teams should not go unnoticed either. Thanks to them, the first teams were able to perform what has now been achieved. For the time being the location is still unknown, but I am sure it will be conquered. On to the 2nd division!